Details of the preset normalization scenario for the RNA-Seq data.

When you measure the transcriptome with RNA-Seq, there are a lot of 0 (or missing values) in the table of read-counts (Counts). The difficulty with RNA-Seq data analysis is that 0 indicating no mapped read does not necessarily mean the gene is NOT-expressed.

The reason is obvious when you look at a table of Counts from replicated samples. You can easily find genes with a Count value at a sample while 0 at another. It suggests that it may not be captured by the sequencer even if expressed. It is probabilistic whether an expressed gene has a Count value or 0 by chance. The lower the expression, the higher the probability of being counted 0. We can find such genes more in the noise range.

For The Count Data

If you have replicate samples and look at a scatter plot of Counts among them, you will see dots converging on the diagonal in the range of high values, but not in the low Counts'. They are the signal and noise range of the data. There is no definite boundary between them. Although the border strictly depends on the actual data set, the higher than 100 for Count often looks like the signal range, and the lower than ten often looks like the noise. And the boundary often looks lying somewhere between 10 and 100. As mentioned above, genes in the noise range have more chance of having 0 Counts. (black dots) 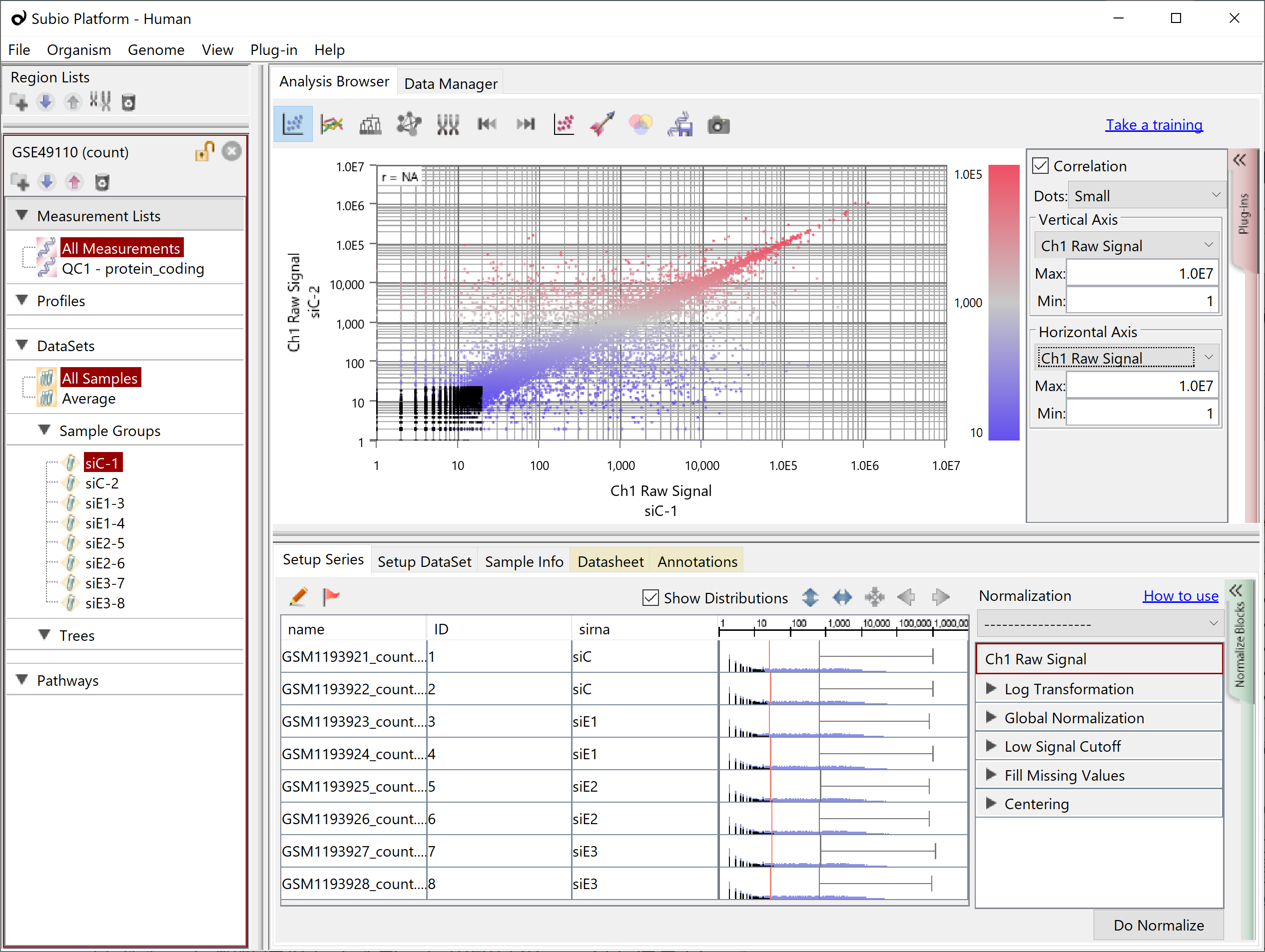 By Step 1, the 0 Counts turn to the missing value.

In Step 2, you can adjust the percentile. The broader dynamic range allows lower percentile, and narrower dynamic range restricts the percentile to high. The TPM generated through the FASTQ file processing is already normalization per 1kb length and 1 million reads. The Count is obtained by reverse-calculation from the TPM for de-normalized to gene size. In other words, normalization per million reads is built-in. Therefore, there is no need to overlay Global Normalization. However, it would be better to have Global Normalization from our experience. So we include it in the scenario. If the histogram shows that it is not necessary, you may exclude it.

Step 3 is a measure to align the lower limit of Count with the lower end of the signal range to prevent falsely detecting differentially expressed genes (DEGs) due to the measurement values in the noise range.

Step 4 is to replace the missing value of Count 0 with some value. You can set the same value as in step 3, or a little lower. However, you put it with an exponent. Four, the default, means 16 (2^4), which is about half of the cutoff set in step 3.

Step 5 is what makes it a ratio to the mean of the whole sample. You can replace it with the Ratio to Control Samples block if you have the control.

Analyzing TPM, FPKM, and RPKM data is more troublesome than in the case of Count because the noise region is spread over the signal region (black dots), and replacing 0 with some value can bring the problem of falsely detecting DEGs as mentioned at the beginning. 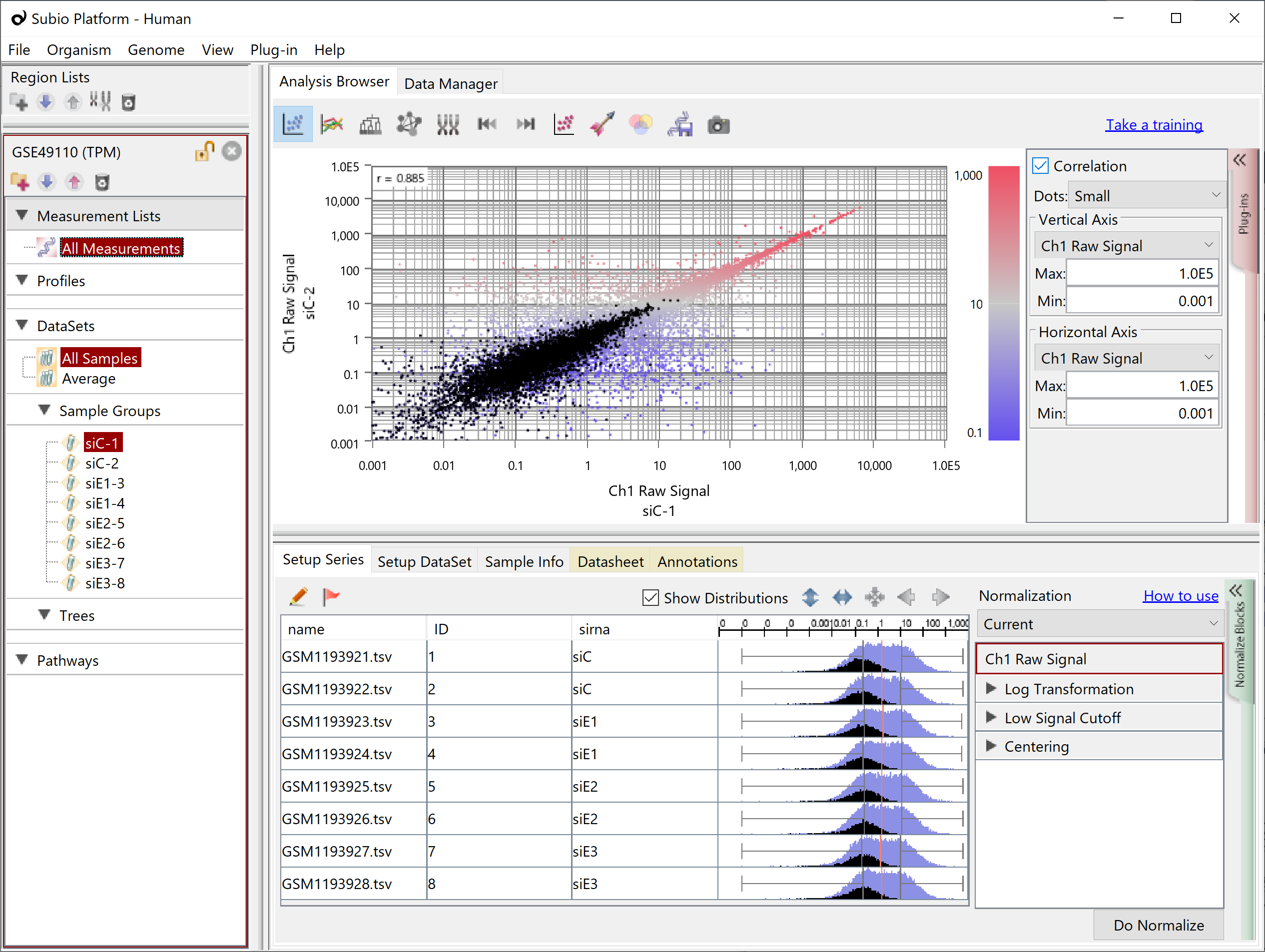 Up to step 2 is the same as the RNA-Seq (Count) scenario, so please refer to the description there.

Step 3 sets the lower limit value, but unlike the case of Count, it cannot cancel the effect of the noise range. The usage is minimal.

In the case of Count, the Fill Missing Values block was applied here, but in the case of TPM/FPKM/RPKM, it is better not to use it. For detecting DEGs, not only using the fold-change and P values but also extracting genes with the data lack in group A but with some measurement in group B or visa versa. Remember to take this extra work.

The explanation of Step 4 is the same as the above Centering. The caveat is that it is better not to replace it with the Ratio to Control Samples block because the measurement value can be null in the Control Samples.

However, if you do a multivariate analysis such as clustering in this state, the missing values will get in the way. So, you could add Fill Missing Values after Centering and replace it with some value that represents a decrease in expression, such as -1. Therefore, it is necessary to switch the presence or absence of Fill Missing Values between the expression difference analysis and the multivariate analysis, which also takes time.

The RNA-Seq data analysis on TPM is trickier than Counts. Please watch also the Counts version.